Anna Savina,
Content Marketing Manager at Miro
Anna has written about experience design, product development, and workshop facilitation. She has been working in distributed teams for three years, and is passionate about helping them succeed.

The Most Important Remote Work Statistics

Over the past decade, new collaborative tools and technologies have changed the way we think about remote work. And the world is embracing this change: companies are offering "work from home" days, co-working spaces are popping up everywhere, workers are fleeing tech hubs like SF and fueling a job renaissance in other U.S. cities, “digital nomads” travel the world and work from where ever there's an internet connection.

But how big is this remote job trend and what does it mean for workers and their employers? Let's take a deep dive and look at what remote work stats say about the movement.

Sure, it’s easy to think of reasons why professionals would dream about working from home. The schedule flexibility, the ability to live in a low-cost city, the fact that they could spend more time with their family. But what do the actual numbers say about what remote work means for employees? Here are three important statistics.

1. Remote work positions are on the rise

While demand for remote jobs is certainly growing, so is the supply. The Remote Work Statistics for 2019 report by FlexJobs showed that from 2016 to 2017 remote work grew a whopping 7.9%. Over the last five years, it has grown 44% and over the previous 10 years, 91%. That’s a pretty big growth trend. Not all of these jobs are fully remote, but 69% of companies surveyed by Miro have at least one team member working remotely full-time. 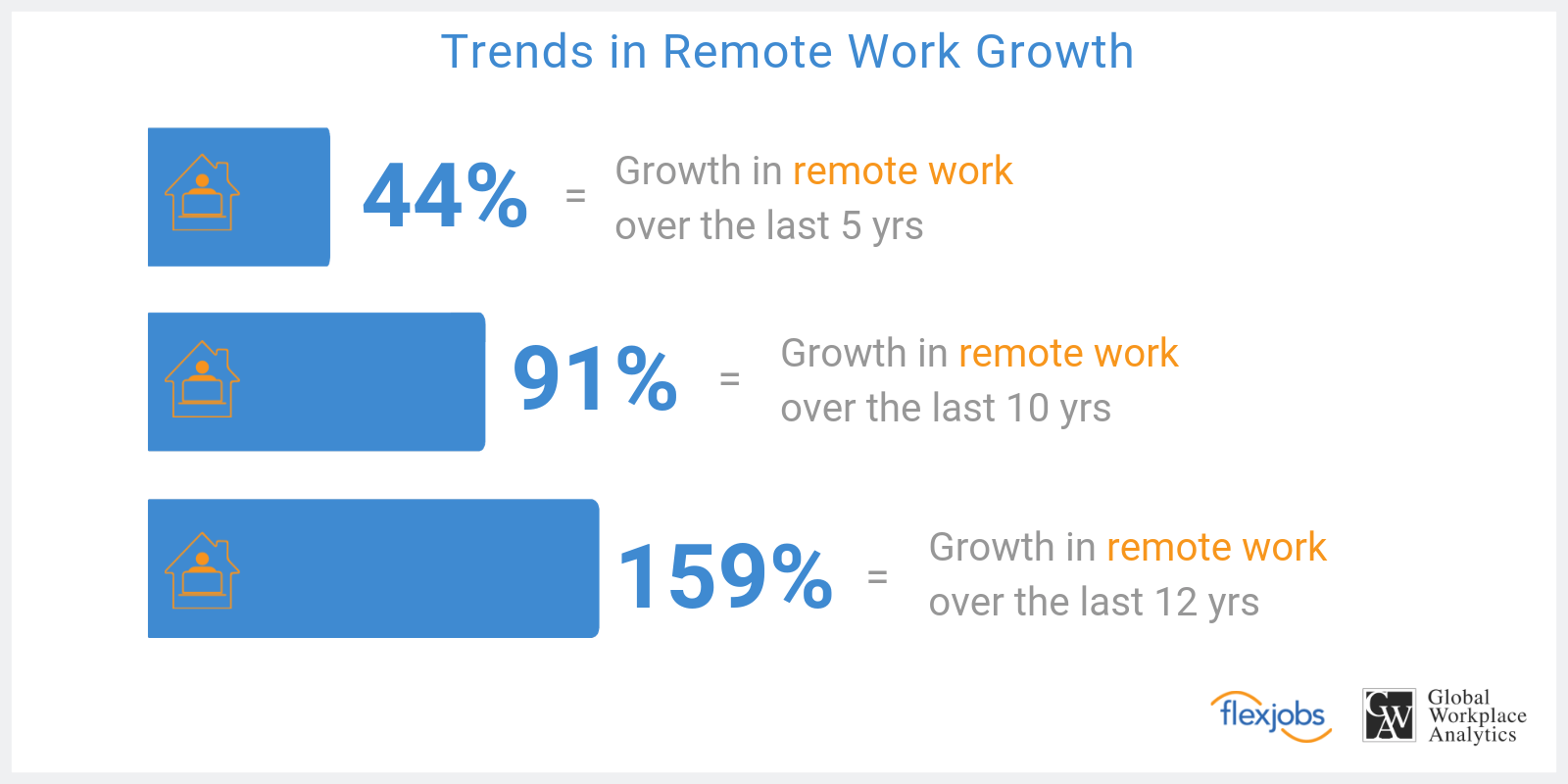 In 2016, Phyllis Moen and Erin L. Kelly (from the University of Minnesota and MIT, respectively) studied Fortune 500 companies’ employees who tested letting employees have a flexible schedule and work from home more. The group reported “higher levels of job satisfaction and reduced levels of burnout and psychological stress” than company employees who did not participate.

Study participants were also offered the opportunity to reduce the number of daily meetings and communicate more via chat, which resulted in their ability to better anticipate periods of high demand, and feel more in control of their lives and in tune with their families.

“Today’s workers are bombarded by advice on how to juggle their work and family lives. Our study makes clear that organizational initiatives, including programs that promote greater flexibility and control for workers as well as greater supervisor support, are needed.”

—Phyllis Moen, the McKnight Endowed Presidential Chair in Sociology at the University of Minnesota

We’ve established that both remote work demand and supply is growing rapidly, and that there are clear benefits for remote employees. But what does all of this mean for employers? Here are remote work three stats you should know about from a company standpoint.

According to the latest Gallup State of the American Workplace report, engagement levels increase for those who work from home, so remote team management is less of a challenge. Gallup’s study shows that these workers are slightly more engaged (32%) than office workers (28%).

An additional insight: despite all the obstacles, most remote workers have a stronger sense of belonging than their colleagues who work on-site. The study says that regardless of the fact that remote workers often communicate with their teams only over the internet, they feel like their “opinions seem to count.”

According to data from Owl Labs’ 2019 State of Remote Work report, ”remote workers say they are likely to stay in their current job for the next five years 13% more than onsite workers.” This may seem like a small difference but at scale, eliminating churn can help a company save a lot of money and resources.

It’s also telling that once employees have remote work as an option, they see that as an important benefit. Owl Labs stats show that 55% of remote workers would be likely to look for another job if they were no longer allowed to work remotely, and 61% of them would expect a pay raise if this kind of change happens.

3. Most remote workers take 2-3 weeks of vacation per year

According to the 2019 State of Remote Work survey by Buffer, 32% of remote workers get an unlimited vacation. However, the majority of them only take two or three weeks off each year. Most likely, this has to do with the flexibility of remote works. When people have more control over their schedules, they feel less stressed and don’t need as much time off as if they worked at the office. 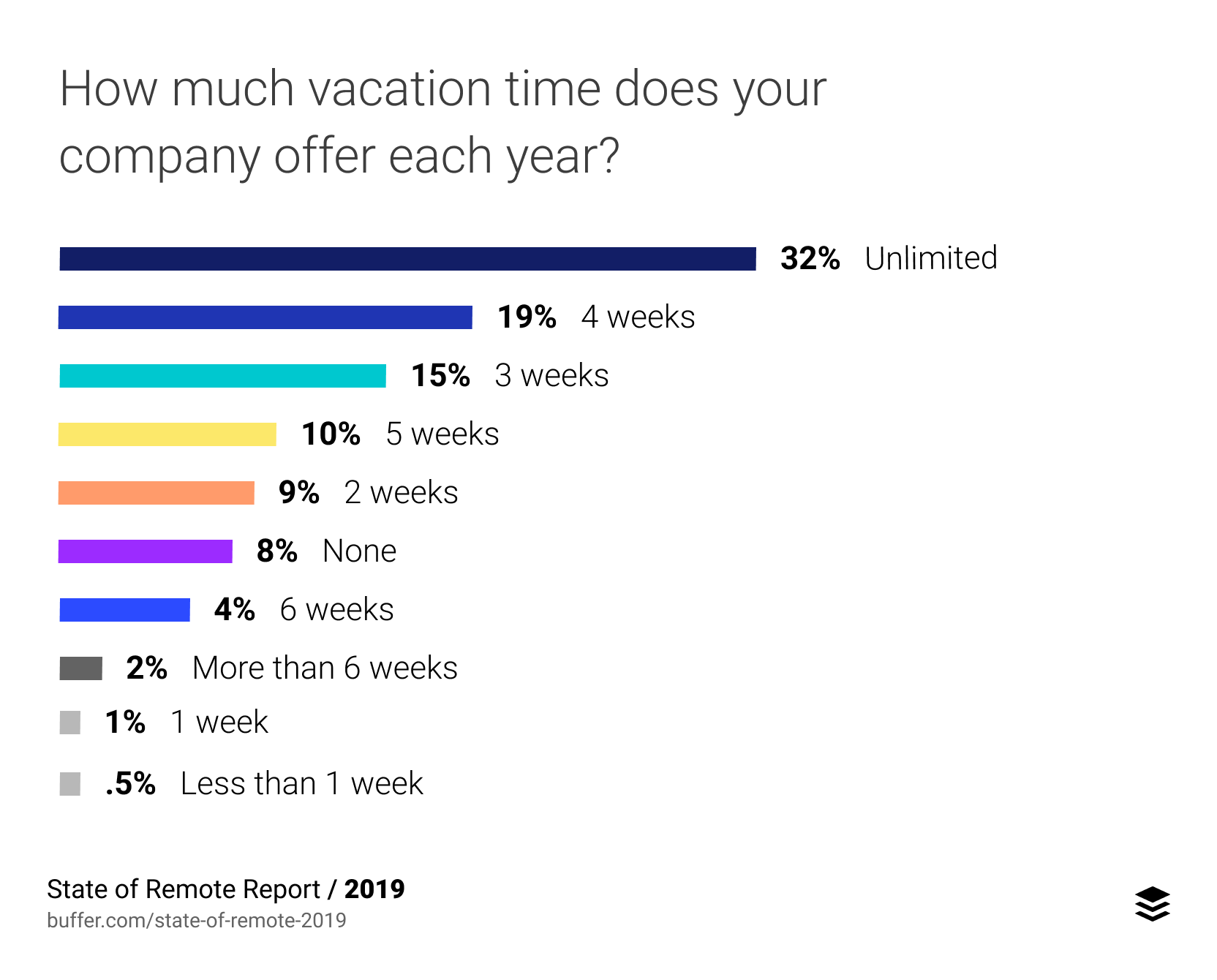 Remote workers also get a chance to combine traveling and work. According to Buffer, “44% of remote workers travel while working between one week and one month per year, and 25% of respondents do this work/travel combination more than one month of the year.”

Increased productivity is a win for everyone involved, from the employee themselves to the company they work for. There are multiple studies that have now disproved any myths that remote workers are less productive than their in-office counterparts. Here are three important stats to consider.

1. Remote work may be the key to increased productivity

A 2012 Stanford study showed that flexibility of remote work may be the key to increased productivity. Stanford economics professor Nick Bloom analyzed the performance of people working for CTrip.com, a billion-dollar NASDAQ-listed company based in Shanghai.

He and his colleagues compared the efficiency of those who worked from home for four days a week and those who worked from the office. The study showed that remote employees worked more hours because they had shorter breaks and less sick leave. They also stayed with the company longer and reported a higher level of happiness.

In the recent two decades after the era of cubicles ended, thousands of organizations from all over the world embraced an open-office layout. Especially in Silicon Valley, most of the tech companies’ HQs have this layout, as their senior management stresses the importance of collaboration and a free flow of ideas.

According to data from Owl Labs’ 2019 State of Remote Work report, remote workers say they work more than 40 hours per week, 43% more than on-site workers do. However, the two groups overwork for different reasons. People who work from office stay longer because it’s their management’s requirement, while remote workers often choose longer hours because they like what they do.

What these statistics say about the future of remote work

If remote work had a customer satisfaction score, it would be sky-high. As the trend has grown, people generally report the benefits of flexible schedules, work/life balance, and productivity improvements. Results from various surveys confirm: those who’ve gone remote aren’t looking back, and remote work is here to stay.

Next up: Guide to Hiring Remote Employees

Share
Get Miro app
Add ideas, digitize sticky notes, and leave comments on the go with Miro mobile app
Not now Open in the app